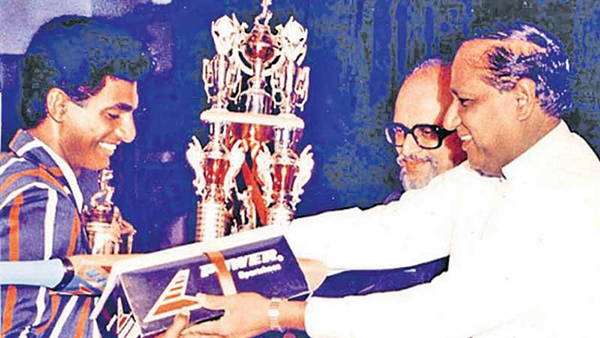 Flashback 30 years ago: Muttiah Muralidaran of St. Anthony’s College, Katugastota receiving the Observer Schoolboy Cricketer of the Year 1991 title from then Housing and Construction Minister, the late B. Sirisena Cooray watched by then Editor-in-Chief of Sunday Observer H.L.D. Mahindapala

A big focus on school cricket would naturally come as all schools in Sri Lanka will reopen from tomorrow. Although the schools in all other provinces had already started, schools in the Western Province were closed due to the Covid-19 pandemic.

But with the schools in Colombo, Gampaha and Kalutara districts finally starting from tomorrow, sports activities too will get a big boost.

This will pave way for a larger interest on school cricket. Especially with the new inter-school season on after a lapse of one year due to the Covid-19 pandemic, there will be tremendous interest for the game.

Moreover, the Sri Lanka Schools Cricket Association (SLSCA) conducted inter-school under-19 limited overs cricket tournament is in full swing and the preliminary round matches, which began early this month, are expected to conclude on April 9.

After a nine-day break for the Sinhala and Tamil New Year, the final round matches will begin from the quarter final stage on April 18.

All first round league matches of the division 1, 2 and 3 tournaments are due to conclude on April 9.

The final round matches will begin on April 18 after the Sinhala and Tamil New Year break. The final of the Division Two tournament will be played on May 1 and the Division One final on May 2.

The 42nd Observer-SLT Mobitel School Cricketers of the Year mega awards ceremony will now be held on April 20. The local health authorities have given their approval to go ahead with the preparations.

All schoolboys consider the Observer-Mobitel School Cricketers of the Year as an unofficial guarantee for schoolboys and girls to sport the Sri Lanka cap.

The four-decade plus history of the Observer-Mobitel School Cricketers of the Year contest has given that much-needed inspiration and motivation to the country’s budding schoolboy cricketers to extend their playing careers beyond school level.

There have been many outstanding players who aggregate over 1,000 runs or capture over 100 wickets during a season but only a few have taken such performances to the next level.

Playing for a reputed club after ending their school careers and winning the Sri Lanka cap thereafter has been the dream of every school cricketer but only a handful of them would eventually fulfill that dream.

Having captured over 100 wickets each is successive years, Murali was adjudged Observer Schoolboy Cricketer in 1991 when he was playing for St. Anthony’s College, Katugastota.

As an outstanding player, he not only achieved that goal in style but had also erased many world records in Test cricket. He had emerged champion bowler in the premier school cricket awards show some 30 years ago.

Three decades ago, there was the spectacular news in school cricket about a magical off spinner who had shattered the dreams of all batsmen in inter-school cricket during that period.

The publicity-shy and soft-spoken young cricketer from St. Anthony’s ultimately posed the biggest headache to all top batsmen in world cricket.

The Observer Schoolboy Cricketer of the Year title he had won in 1991 was the stepping stone for the young lad. After making his Sri Lanka debut soon afterwards, he cemented his place in the Sri Lanka team in next to no time.

He was eventually garlanded as the highest ever wicket-taker in Test cricket, establishing several other milestones in international cricket. Spin wizard Muralidaran returned to the Observer Schoolboy Cricketer of the Year stage in 2011 as the chief guest, some 20 years after his crowning glory.

He looked emotional when he went down memory lane on that occasion. “You are the future Sri Lanka players. You must keep the Sri Lanka flag flying wherever you go,” he said as the chief guest.

“Play hard and dedicate yourself, then success is bound to come. As young cricketers, you must keep in mind that only 11 could play in a team. When you get that rare chance of playing, you must put your heart and soul and give hundred percent to the team, so that success will come your way,” Muralidaran added.

He paid a tribute to the Sunday Observer for its role in rewarding the outstanding schoolboy cricketers since 1979.

“Don’t be disappointed if you fail once or twice in the early stages of your career. Keep on trying and success is bound to come your way,” he was quoted as saying.

Muralidaran, born on April 17, 1972, has achieved loads of records which would be hard to emulate. He is the only player to capture 800 wickets in Test cricket while performing in 133 Tests with an attractive average of 22.72.

He has enjoyed match bags of ten wickets or more on 22 occasions with his deadly off brakes – a world record. No other bowler has captured five wickets or more on 67 occasions in Test cricket. He has an equally impressive ODI record of 534 wickets with an average of 23.08 apiece in 350 matches.

It is heartening to see the Mega Show completing its 43rd anniversary this year. Most importantly, the country’s national mobile service provider has been associated with Lanka’s first-ever school cricket awards show for 14 years.

Sri Lanka Telecom Mobitel is extending the fullest support to make the Mother of all Shows a resounding success once again as it continues to remain the dream of every schoolboy cricketer.

The contest for the 43rd Observer-Mobitel Most Popular School Cricketer will commence shortly. Hence, it’s high time to support your alma mater by voting for your favourite schoolboy cricketer and motivate the next generation cricketers when this year’s most popular contest starts shortly.

It is good to discover that several others have followed the Sunday Observer’s initiative to hold similar awards shows to commend the achievements of schoolboy cricketers after every season. But the Observer Schoolboy Cricketer of the Year remains the ‘Mother of all Shows’.

Needless to say how important it is for schoolboy cricketers to win an award as recognition of their commendable achievements after a strenuous season. It is not just appreciating their achievements but also a big inspiration for them to step into the big league.

All past winners of this prestigious title have repeatedly said what a big inspiration the award had been to their cricket careers. Since its humble beginnings at the Nawaragahala in 1979, the Observer Schoolboy Cricketer of the Year contest has gone from strength to strengthen.

Chairman of Sri Lanka Telecom and SLT Mobitel, Rohan Fernando has always promoted sports activities in Sri Lanka in a big way and also given every possible assistance to the Mega Show which will march forward with more power and strength.

SLT Mobitel is sponsoring the show for the 14th successive year at a time when the company is heading towards new horizons under the dynamic leadership of Fernando, the former Thomian ace rower.

The Lake House management has strongly backed the Mega Show. Its Chairman, President’s Counsel W. Dayaratne and its team of Board of Directors – Dharma Sri Kariyawasam (Editorial), Rakhitha Abeygunawardhana (Legal and Administration), Janaka Ranatunga (Finance) and Canishka Witharana (Operations) have always been a tower of strength to take the Observer-Mobitel School Cricketers of the Year to greater heights.

Lankans drowning in the ‘river of no return’ in L/O cricket?