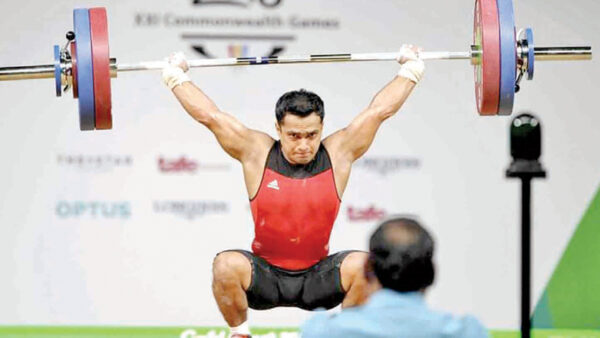 Thilanka Viraj Kumara in action at the meet in Snatch. Pictures. by Upananda Jayasundera-Kandy Sports Spl.corr

Twenty eight year old Thilanka Viraj Kumara is one of the finest weightlifters of Sri Lanka at present and he was adjudged the Best Lifter for four consecutive years from 2016 to 2019 at the National Weightlifting Contest as well as the National Sports festival. He had his education at Seva Muktha Maha Vidyalaya, Polonnaruwa and his weightlifting career started in the year 2010 under the coaching of the Late Kumudu Kumara Silva and Raju Wansapura, both talented weight lifters.

In the year 2021 Weightlifting trials he established Three S/L Records lifting 118 Kg. in Snatch, 145 Kg. in Clean and Jerk and a total of 268 Kg., but at the recently concluded Asian Weight lifting Championship held in Tashkent, Uzbekistan he was sadly unplaced. Thilanka’s next International Weightlifting contest will be the Commonwealth Games to be held in England in the year 2022 and the Asian Weightlifting Championship to be held in the same year and the venue will be notified in due course due to the prevailing condition in the country.

He is determined to do well in these events as he was able to win a Silver Medal at the 2017 Commonwealth Weightlifting Contest held in Malaysia and he is thankful to his present Coach R.B. Wickremasinghe, a veteran Weightlifting Coach.

Over 8 000 persons still in quarantine

eLanka | A RE-UNION OF TWO CAPTAINS