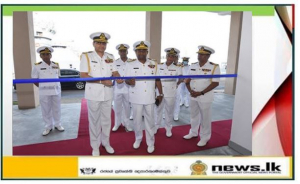 The construction work of the complex was completed in a short span of time, following the directives of Commander of the Navy and the brand new facility includes storage for
ship spares, equipment as well as an Engineering and Electrical Auxiliary Workshops.

This facility would deliver maintenance and repair needs of AOPVs under one roof, thus making expeditious solutions for running repairs as well as routine maintenance of OPV
fleet, ultimately resulting in the much needed impetus for efficient and effective maritime operations.

Meanwhile, Commander of the Navy also took time off to address those who made their contribution for the construction of this new facility and expressed his appreciation for
the job well done.