If you are new to the Sri Lankan Tamil diaspora music scene, we’ve made a starter-list for you with song recommendations. 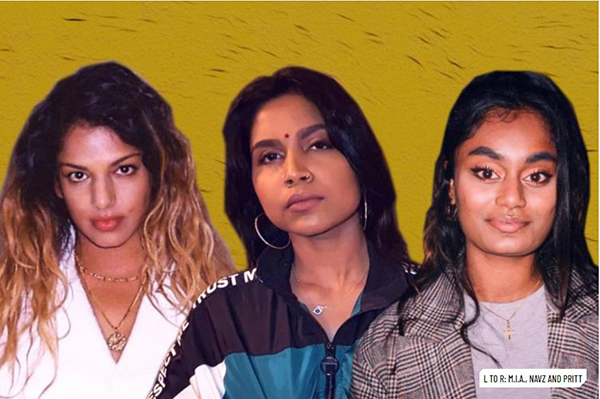 If you are into Tamil indie music, thanks to Arivu and Dhee’s ‘Enjoy Enjaami’ that has already become 2021’s anthem, now is a great time for you to discover a whole world of independent Tamil musicians from the Sri Lankan Tamil diaspora too. Theirs is a style that’s distinct, very much like the Sri Lankan Tamil language itself. Coming from a space laden with inter-cultural influences, the music that’s being made by these women of colour stands apart among western pop and rap music.

While it’s difficult to blanket them under a single style, these young women have their own stories of struggle packed into the music that they create, delivering it with soul and at the same time drawing sharp attention to the Sri Lankan Tamil diaspora.

From identity politics to bullying, love and war, their music encompasses a wide range of topics. If you are unfamiliar with the Sri Lankan Tamil diaspora music scene, we’ve made a starter-list for you with brilliant women musicians and song recommendations.

It is inconceivable for this list to start without Mathangi “Maya” Arulpragasam, known by her stage names Mathangi, Maya and M.I.A. She is undoubtedly the explosion in the music scene that made way for many others to come. M.I.A. isn’t just the average musician with billboard topping songs but a sensation who pioneered indie music from this part of the world in the early internet era, a fashion icon and a visual artist with an eclectic style. She’s also an activist who has been drawing the world’s attention to Sri Lanka, her homeland.

M.I.A. was propelled to fame with the release of her debut album ‘Arular’ in 2005. Through her works, M.I.A. has discussed a wide range of topics from political violence to identity politics, to even the perils of the digital age. There is a lot to discuss on M.I.A.’s music and her activism but we’ll keep it short. In a 2018 interview with The Atlantic, M.I.A. had spoken about her art, politics and activism. “It’s a luxury not to be political in your work. If I lived in the land of marshmallows with unicorns flying around, that is what my art would be about. But unfortunately, what I know is what I know. And that’s what I make work about,” she had remarked.

Elsz’s music can be described as transcendental. A singer/songwriter and a harpist, who grew up between Colombo (Sri Lanka) and Sydney (Australia), Elsz describes her music to be between “soulful avant pop and experimental R&B (Rhythm and Blues).” She has delivered some very profound music, the most recent being “Your Rage is Necessary Pt 1”. Writing about what went into the making of the song in a post, she said, “‘Your Rage is Necessary, Pt 1’ was born from a conversation I had with a close friend – Alok Vaid-Menon, around healing ancestral trauma and breaking cycles that perpetuate violence. This song speaks to the tectonic and seismic swell of rage that is necessary to be felt and expressed to heal and birth change. As a survivor and a queer femme person of colour this song is both protest and prayer, this song is a way to remind my own body and other bodies like mine that our rage is valid and necessary.”

This Tamil-Canadian singer chooses to make her music in Tamil, although she’s fluent in English and French. Naveeni Athanasious Philip aka Navz 47 makes music that is fresh and comes with a distinct flavour, combining the Tamil language with pop and rap elements. The singer has spoken about her rebellious side in interviews, referring to her tagline “don’t be like Naveeni akka”.

Navz has, during the short span of her career, openly engaged on the topic of bullying. In an interview with EdexLive, Navz had said, “Since I didn’t look like any of them, I was bullied a lot in school and faced a lot of racism growing up. Music became my biggest weapon to fight bullying.”

The South London artist recently released her second EP titled ‘Transparency’ in July 2020 which has six songs. The young singer who mixes a bit of Carnatic in her music, has tracks titled “Amma’s Advice” and “Appa’s Blessing” in the EP with recordings of her parents’ voices leading the song. Pritt’s music stands out for its earthy tone that has a bit of Rihanna vibes to it. The singer also released an anthem soon after the International Women’s Day last year with hard-hitting lyrics that compare how a society treats its men and women.

While she may just be one-album young, Rolex Rasathy comes with all the suave and style that her name calls for. Rolex Rasathy is a classically trained Carnatic musician who then discovered her independent style quite recently. Born and raised in New York, Rolex Rasathy came out with her debut experimental EP (Extended Play) titled ‘Vellavattai’ following her first visit to Sri Lanka in 2016. Her music has Carnatic influences in addition to jazz, R&B, and hip hop bits woven into it.

Rebelle is another young artist who must be on your radar. The Sri Lankan Tamil artist is an upcoming rapper with a zing in her voice. Collaborating with artists like Sophia Akkara, Rolex Rasathy, Daniel Yogathas and Sajeev and Julian Nobox, Rebelle manages to grab your attention with her artistic style.