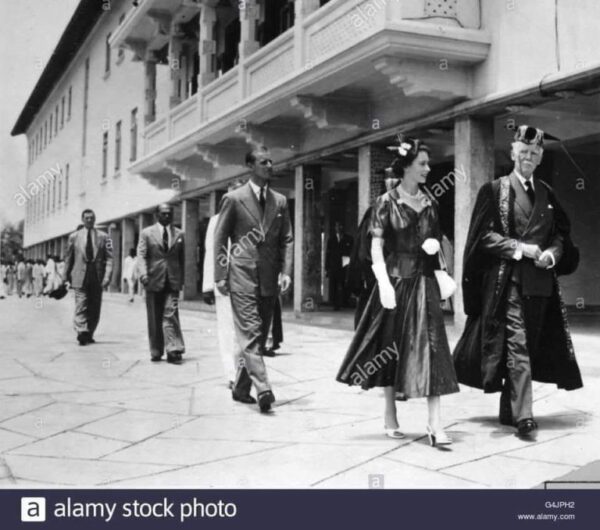 This striking and rare photograph from 20th April 1954 shows Lord Soulbury leading the young Queen Elizabeth and Prince Philip on their way to inaugurate the formal opening of the University of Peradeniya at its “Senate Building” — whereupon Prince Philip displayed acumen in deploying the original words –“more open than usual” when verbally administering the opening. What apt words!

This Pix has been sent to me by Gerald Peiris.

While the royal duo are clearly the stars of this outstanding moment in the island’s history, I prefer, here, to highlight the importance of two British gentlemen in Sri Lanka’s coming of age: namely, Lord Soulbury and Sir Ivor Jennings.

I conjecture that Jennings is hidden from view in ths picture. It would have been the clout he wielded with Soulbury and the DS Senanayake Cabinet from 1948 onwards that enabled him to ‘deploy’ the royal couple at this momentous occasion (one that is deeply meaningful  for all those, such as Peiris and myself, educated at this site in the 1950s and 1960s).

To drive this line of argument home, let me present other photographs which mark the role of Sir Ivor Jennings and Lord Soulbury in Sri Lanka’s difficult and tortuous passage to “dominion status” — a political position that was perhpas a notch short of “independence” in a strict sense but no impediment in the long run.

Layton was appointed Commander-in-Chief, Ceylon (Sri Lanka) in March 1942,[3] and served till August 1944, with Oliver Goonetilleka serving as Assistant Civil Defence Commissioner …. and thus providing a direct conduit between DS  Senanayake and Layton

The complicated and tortuous passage from partial political control under the Donoughmore Constitution from 1931 calls for a close study of the period 1938 (when the Andrew Caldecott Reforms Despatch was sent) to 1948.  The most thorough writings on this topic are those by KM de Slva; but fresh work by Harshan Kumarasingham, this writer and Jane Russell is also pertinent. note that the Soulbury CommissIon”s recommendations were a major step in he process towards dominion status ,,,, and as it happned, their itinerary during the working visit to the island was oganised by OEG. That he was in their ears in judicious manner is not in doubt.

Such processes must be digested when addressing the popular theory that Sri Lanka received independence on a plate because of the brave and sturdy Indian struggle for independence.

That theory is quite naive. It is oblivious  — stark blind — to the fact that the British Navy was of limited use in suppressing any armed stuggle in India — in contrast to island Ceylon …. and to the implications of World War II for the island’s significance to Britain and its allies in the period 1941-1950s.  It must not be forgotten that the war situation in the Pacific and Indian Ocena in the period 1942-45 was so perilous that Admiral Geoffrey Layton was appointed Commander-in-Chief, Ceylon (Sri Lanka) in March 1942,

Subsequently,  the pressure mounted by DS Senanayake and OE Goonetilleka (with Jennings in a key advisory role in the background) in the period 1943-45 was such that DS Senanayake was able to walk up to the Colonial Office in 1945  [he had flown to UK] and ask them: “what has India done that Ceylon has not done” (or words to that effect) during the war.

DS and OEG with a British VIP

The Colonial Office had no retort at hand.

The stark fact was that the India Office had more weight than the Colonial Office because the political questions associated with India were far, far more important for Brtiain THEN in 1945-47. The little island had to wait for the sub-continental situation to be sorted out.

H.Kumarasingham 2018 Constitution-making in Asia. Decolonisation and State-Building in the Aftermath of the British Empire, Routledg3

H.Kumarasingham 2013  https://www.researchgate.net/publication/280664428_’The_Jewel_of_the_East_yet_has_its_Flaws’_The_Deceptive_Tranquillity_surrounding_Sri_Lankan_Independence/citation/download‘The Jewel of the East yet has its Flaws’ The Deceptive Tranquillity surrounding Sri Lankan Independence,” …

Michael Roberts 2018 “How It Beccame. Documenting the cEylon National Congress,” 22 May 2018, https://thuppahis.com/2018/05/22/how-it-became-documenting-the-ceylon-national-congress/

This new find (mine by accident) depicts another ceremony which led me to wonder if it was in Kandy or Trinity College; but Sam Samarawickrema indicated that it is likely to have been a gathering in front of the Colombo Town Hall with the local dignitary being the Mayor TN Rudra … and this  has been confirmed independently by Pamela Cooray who noted the pottu on the sareed lady’s forehead as clinching identification.