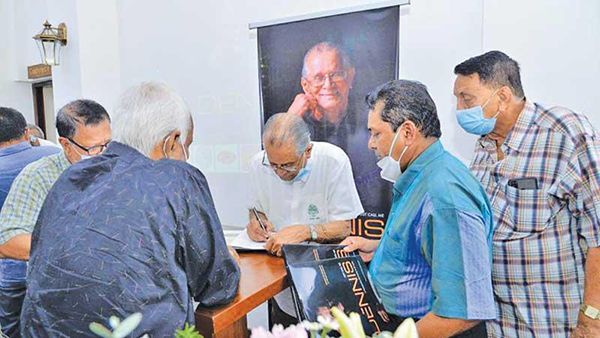 ‘Just Call me Dennis’ a biography of a living sports legend penned by Nilanga Jayawickrema was launched earlier last month at the Burgher Recreation Club amid an august gathering.

It was a memorable sight to see sports hallmarks of yesteryear gathered to reminisce the glory days. The Book is a retrospective of hockey in Sri Lanka and a first of its kind in the hockey fraternity of Sri Lanka.

The day opened with a prayer and two minutes silence for sports friends and associates, which followed a welcome address by Dennis de Rozairo himself, thanking all his tutors, sports colleagues, mentors and associates who were part of the 60 years of glory.

This was followed by the Reading of the Book by Pastor Ramesh Schaffter. Pastor Ramesh picked on some key highlights covering Dennis’ preschool and college days at St. Benedict’s where he shone as a sportsman showing his prowess for greater things to come and representing the Ceylon hockey team as a schoolboy.

His first sports club was the United Youngsters Hockey Club in Kotahena in 1951 and then joined BRC in 1954 as a young robust lad rubbing shoulders with dons of the time and its story walking through the successes of the club in hockey.

Today Dennis serves as Patron of the BRC. Having joined Heath and Company just after leaving school, he commenced his association with the Mercantile sector representing the MHA in their first overseas tour in 1956.

The Mercantile Hockey Association was formally inaugurated in 1957. Dennis with much dedication and hard work was elected President of the MHA in 1978 and served as its head until 2007 transforming the institution into a robust and benchmark in the sporting annals of the country.

Now at the age of 83 he serves the MHA as an Honorary Life Member and continues to roll out his gems of advice to the younger generation. This period showed many youngsters representing Sri Lanka from the MHA which won the National Championship on eight occasions and runners-up six times and making it possible to compete in overseas tournaments seven times to give the young lads credible international exposure during his Presidency.

The book supported with many valuable pictures is a masterpiece for hockey enthusiasts. Dennis presented the first copies of the book to those who supported him producing this legacy.

Chandra Schaffter in his address recounted the early days of Ceylon hockey and Dennis’ role in its progress while commending him as a solid and dependable player having held the Indian Olympic greats, the likes of Dayan Chand, Balbir Singh and Leslie Claudius when Ceylon played India and to his astounding gift as an immaculate administrator.

Dennis attitude and approach were a motivation to him and to the Mercantile sector in supporting the progress of the sport in the country. Schaffter was a Vice Patron of the MHA.

Hemaka Amarasuriya past Patron of MHA, in his address highlighted the administrative prowess of Dennis and drawing a parallel, mentioned that he was also a good cricketer and had he taken the route to cricket, today cricket administration would have been the benefactor and at a different level.

However it would have been a loss to hockey said Schafter.

Dennis placed institution first before self and was a strong disciplinarian, hall marks of great administrators. He wished for the MHA to have its own premises and an opportunity to place all the valuable photographs that is in the custody of him collected over the years as a motivation for the next hockey stars of the country.

The legacy of a legend. A token of gratitude was presented to Helene de Rozairo by the MHA. The citation for the presentation was made by Vice President MHA Ajith de Silva COO Automotive and Hardware Browns Group who said that behind every successful man is a woman. The token was presented by Vice Patron MHA Taraka Ranwala Senior DGM Operations, Sampath Bank and Secretary MHA Asif Bari Director SRB Logistics. (AN)

Lankans drowning in the ‘river of no return’ in L/O cricket?