Thuppahi’s recent presentation of a striking photograph unearthed by Gerald Peiris which depicts world-famous dignitaries on their way to formally declare the University of Peradeniya open for the business of study and play has  attracted pleasure as well as information on the hands that may have been at work on this design. The debate on the choice of site for a new University branch is a separate and complicated issue. The focus here is on the architectural and landscaping designs.  As I indicated, Shirley De Alwis [also spelt D’Alwis?] was the principal architect (and we require bio-data on this man). But, what else can we gather? Here are some preliminary responses. The Editor, Thuppahi 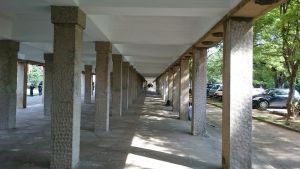 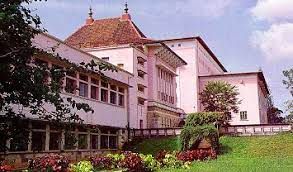 Note from Nathan Sivasambu in London, 19 April 2021: “Michael, Thank you. I’ll have it framed. I was Peradeniya at the time. Prince Philip declaring open the University at Senate House, “which was designed on [in the style of] the Brazen Palace,” said: it is more open than usual.”

The Brazen Palace at Auradhapura in ruins and after restoration

Note from Stanley ‘Sam’ Samarasinghe in Washington, 19 April 2021: “The Curator was Mr. Dahmapath. My hunch is that he retired in the 1970s. He was in overall charge of the campus landscape department. I do not think that position exists today.  But I may be wrong on that.

His assistant was Mr. Kulasekera. Mr Abeykoon (nicknamed “Wal Abey” not because he had a wayward character but because he was in-charge of keeping the grass in trim) was the overseer who supervised the landscape workers. (Abeykoon was a native of Uda Peradeniya. (His nephew SBS Abeykoon is Professor of Civil Engineering and served as VC in the early 2000s.) I do not know if Dahapaptha had any formal qualifications as a landscape architect and his role in designing the  campus landscape. It is possible that Jennings and Shirley de Alwis may have consulted the Head of the Botanical Gardens.” …. Sam

Note from CM  Madduma Bandara in the heart of Nuvarakalaviya, 20 April 2021:  “Dear Mike, It is indeed a historic pic. At this event, the Queen reminded us about the Kandyan Convention and its validity! even as late as the early 1950s!!”

eLanka | Is the COVID-19 vaccine contraindicated with a history of blood clots in the varicose veins, in the past?

Lockdowns across Europe during Xmas season