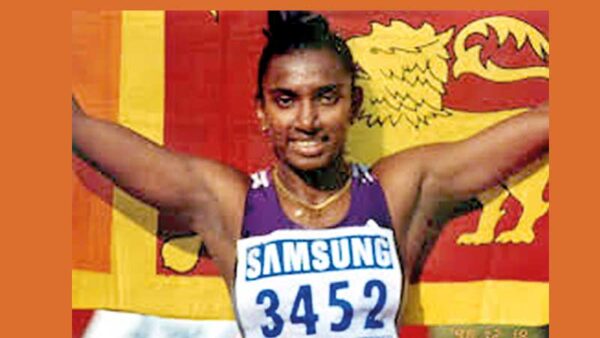 Damayanthi Darsha who created history by being the youngest competitor to gain Olympic representation and also the only schoolgirl to be honoured, was born in Ampara on February 13, 1975.

She received her early education at Ampara Bandaranaike MV and later she joined Panadura Balika MV where she participated in athletics. She had been regularly competing in track events since the age of 13 and

Because of her outstanding success she was given admission to Ladies’ College, Colombo and while there, she won the National title in the 100m and 200m events in 1991.

In the fifth SAF Games held in Colombo in 1991, she became the Fastest Woman in South Asia winning the Gold Medals in both 100m and 200m sprints beating more experienced athletes from India.

She was also a member of the Sri Lanka Team that won the Gold Medal in the 4X100m relay.

Darsha was the first choice for the Olympic Games in 1992 in Barcelona and at the Olympic Games she acquitted herself creditably, qualifying for the second-round in the 200m event. However, her lack of experience prevented her from proceeding further.

After the Olympic Games she participated in an Invitational Athletics Meet in Malaysia and won the Gold Medal in the 100m and in the 200m events. She was awarded the Duncan White Trophy in 1992.

She also represented Sri Lanka at the 1998 Commonwealth Games in Kuala Lumpur, Malaysia and secured the fourth place in the 400m event. At the 1994 Hiroshima Asian Games she won a Bronze Medal in the 200m and was placed sixth in the 4X100m.

In addition, Darsha won the 400m Gold Medal at the 2002 Busan Asian Games while setting up a new record of 51.13s. She proceeded to Australia in 1993 for special training and was later bestowed with the ‘Deshamanya’ Award. (C.D)