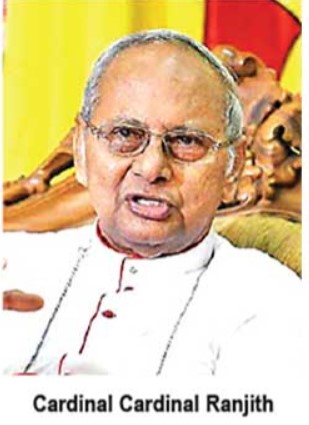 Archbishop of Colombo, Malcolm Cardinal Ranjith yesterday asked the government not to appoint any more committees to delay action against those responsible for the Easter Sunday attacks. He made this statement after visiting a number of churches in Colombo and the suburbs yesterday.

The Cardinal said that the government had time till 21 April to take action against the perpetrators of the attacks and Catholics will take to the streets if their request went unheeded.

“We won’t be fooled again. Please, don’t try to mislead us. The Presidential Commission of Inquiry (PCoI) on Easter Sunday attacks took 18 months to submitted its report. There is no need to delay to act on its recommendations. If taking action, based on this report, is delayed further it is an indication that there is no law in this country.”

“He is still a political party leader. He wants to contest elections. I would like to ask him whether he has no shame. He went abroad ignoring prior warnings of the attacks. How can he go before the people again? The PCoI report says he is guilty. There is no need to delay taking legal action against him.”

The Cardinal added that the PCoI report also mentioned about a senior police officer, who is in now a SDIG in the Central Province. He urged the government to implement the recommendations of the report.

Meanwhile, President Gotabaya Rajapaksa vowed to take action against the perpetrators of the Easter attacks. Issuing a message, President Rajapaksa said that “the sorrowful memory of pain and loss caused by this tragic incident had not faded away from the broken hearts of the suffering people even today.”

The President also said that the government would ensure that such tragedies will not recur.

How Large is the Universe?

Top 10 Things to do in Jaffna: This is Sri Lanka