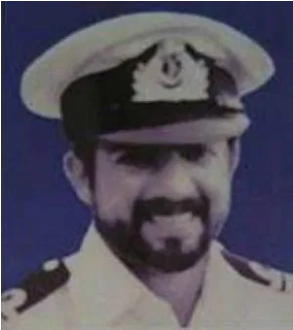 On the 70th birth anniversary of the co-founder of the Sri Lanka Navy Special Boat Squadron (SBS), Late Commander (VNF) Cedric Martenstyn NVX 5068, which fell on 5th October 2016, Sri Lanka Navy renamed their Arrow Boats as “Cedric” in honour of him. The SBS was raised by the present Commander of the Navy, Vice Admiral Ravindra Wijegunaratne and Commander Cedric Martenstyn in October 1993 keeping in line with the Royal Navy’s Special Boat Squadron and the US Navy SEALS Special Boat Unit.

Cdr Martenstyn with his expert knowledge on Speed Boats and Outboard Motors designed the 16-foot Arrow boats which were extensively used by the SBS in the Kilaly Lagoon, Jaffna to fight against the LTTE small boats. Then two new types of weapons, namely 40 mm Automatic Grenade Launchers (AGL) and 7.62 x 51 mm Multi-Purpose Machine Guns (MPMG) were installed on board these craft with a ‘continuous rail mounting’ design. As a result, with the three main ingredients of Firepower, Maneuverability and Speed of the boats, coupled with highly trained and motivated SBS personnel being the motto “Fortune favours the brave” brought about many victories to SLN in Lagoon Warfare.

The Late Commander Martenstyn took over the Command of the SBS in 1995, being the first Volunteer Navy (VNF) officer to Command a Special Force in Sri Lanka. Commander Martenstyn along with another SBS officer, Lieutenant Commander Thushara Palihena were considered Missing in Action (MIA) on 22nd January 1996 when the helicopter they were travelling crashed into the sea off Vettilaikerni due to enemy fire. This occurred when the Late Commander Martenstyn was returning to the Palalay Air base having inspected the SBS troops stationed in the Elephant Pass Army camp on that fatal day.

Considering his immense contribution in designing and manufacturing the Navy’s first arrow boat and appreciating his gallantry and valour in fighting the enemy, on his 70th birth anniversary, the Sri Lanka Navy has named the Arrow boats as “Cedric”.

Following the footsteps of his brave father, his son Flying Officer Jason Martenstyn who was a qualified pilot joined the Sri Lanka Air Force as an AN 32 transport aircraft pilot on 6th September 1994 and died in action on 13th September 1995. In the annals of the history of Sri Lanka, Commander Cedric Martenstyn and Flying Officer Jason Martenstyn are one of the few father and son duo who paid the supreme sacrifice for the unity, territorial integrity and sovereignty of our motherland.

THIS is an Official Communique

A NOTE from The Editor Thuppahi:

The original idea of the SL Navy taking the battle to the Tigers at the interface of land-and-sea was that of Shanthi Bahar and this set of initial pracices was pressed within a concept paper written by Wasantha Karannagoda in 1990. For fuller detalis on the process of developments, see Michael Roberts: “The SBS: Marine Commandos of the Sri Lankan Navy” ,  13 April 2021, https://thuppahis.com/2021/04/13/the-sbs-marine-commandos-of-the-sri-lankan-navy/

Also note that Cedric Martensteyn was a Thomian who played rugger for his school (as did his sons). …. [information from Nihal de Zoysa, an Aloysian who moved to S. Thomas and joined the SL Air Force and therefore knew Jason Martensteyn].

A Chinese Tale: From Surviving the Titanic to Racial Hate in USA

Sri Lanka to receive the Covid-19 vaccine from India tomorrow

Travel to Sri Lanka: What it’s like to visit during the COVID pandemic-by Lilit Marcus